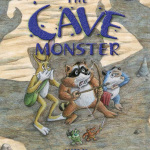 A cave is magical and spooky place

In The Cave Monster, readers are introduced to a magical wonder of nature that becomes  its own character in the book.  I am talking about caves.  In the Cave Monster L. Joe Bean has been captured by the Cave Monster and Whistle-Toe, the rabbit, begs Lima Bear to help rescue him.  The friends are scared of the cave monster and the cave but they want to help their friend.   They enter the cave.

What is a cave and how does it form?

Wikipedia tells us that a cave “is a hollow place in the ground especially a natural underground space large enough for a human to enter. Caves form naturally by the weathering of rock and often extend deep underground.” Speleology is the scientific study of caves and their surrounding environments. We love words and we think the word Speleology (spa·le·ol·o·gy) pretty cool.  There is so much to learn about caves.

Here are some other interesting facts about caves courtesy of Sciencekids.co.nz: 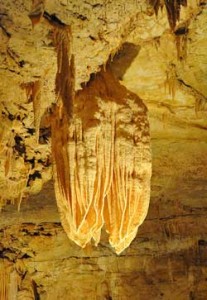 ** Stalactites, (which are beautifully illustrated in the Cave Monster,) are created by the continuous dripping of mineral rich water, which little by little leaves mineral deposits on the ceiling as the minerals harden.

** Stalagmites are created as the mineral rich water droplets fall to the cave floor leaving mineral deposits that grow to become pillar-like formations.

** Stalactites and stalagmites can eventually join from floor-to-ceiling, however they grow very slowly, around an inch every 100 years.

Why we are fascinated with caves

Cave are unquestioningly dark. Dark can mean spooky.  You do not know what is behind every turn in a cave. There is no light to see your way out.  At the same time caves are also super interesting.  They are different from the outside world.  They are cool and calm and decorated with rock formations and truly show the power  of nature.  Plus, living creatures do call caves their homes.  Can you or your child guess what animals are most commonly found in caves?  Nope, it is not cave monsters but spiders, salamanders, bats and fish.

Visit a cave near you and send us a picture

Are you tempted to visit a cave?  We found a cool site where you can type in your state and locate a cave near you.  It is called, you might have guessed it, CaveSearch.com. If you do visit a cave, send along your pictures and we will post them on our site and Facebook page!  We’ll send out 2 copies of The Cave Monster to participants at random. Send your pictures to lbp@limabearpress.com.